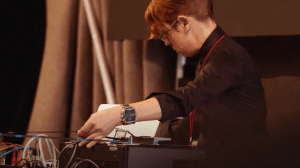 Paula Matthusen is a composer who writes both electroacoustic and acoustic music and realizes sound installations. She has written for diverse instrumentations, such as “run-on sentence of the pavement” for piano, ping-pong balls, and electronics, which Alex Ross of The New Yorker noted as being “entrancing”. Her work often considers discrepancies in musical space—real, imagined, and remembered. Awards include the Walter Hinrichsen Award from the American Academy of Arts and Letters, a Fulbright Grant, two ASCAP Morton Gould Young Composers’ Awards, and the 2014 – 2015 Elliott Carter Rome Prize. Matthusen is currently Professor of Music at Wesleyan University.

one thing five times from Paula Matthusen on Vimeo.