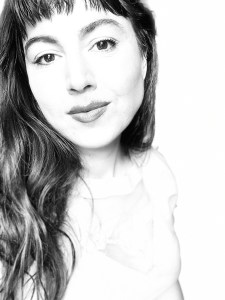 Montana Ray is a poet, translator, and scholar. Her first book of visual poetry, (guns & butter), was described by Cathy Park Hong as a mix of “Apollinaire with Pam Grier.”
She holds an MFA and a PhD in comparative literature from Columbia University, where she wrote her dissertation on settler longing in the work of Cuban and feminist artist Ana Mendieta.
Ray is at work on a narrative nonfiction book, To thicken it, which explores the relationship between “the South” and Central and South America through genealogies, monuments, and cultural performances; you can read her creative nonfiction in The Point, BOMB, Narrative Magazine, and The New Inquiry. She also translates from Spanish and Portuguese mainly feminisms of the 1970s.