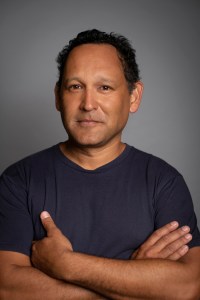 Kevin O’Brien is a Brisbane based architect. In 2018 he joined BVN as a Principal, becoming part of one of Australia’s largest and most highly acclaimed architectural practices. In 2017 he became the Professor of Creative Practice at the School of Architecture, Design and Planning at the University of Sydney. He is a former Board member of La Boite Theatre, and the Institute of Modern Art in Brisbane.

Kevin is passionate about the arts. He collaborates broadly within the visual and performing arts sector as well as his creating his own works. He has produced set designs for Queensland Theatre Company, La Boite Theatre and Moogahlin Performing Arts, and installations for Urban Theatre Projects, Bleach Festival, the Sydney Festival and QAGOMA. Exhibition designs have been completed for the National Gallery of Australia, the National Museum of Australia, the Queensland Museum, the Institute of Modern Art, and the Venice Architecture Biennale.

Of specific significance is the Finding Country project that began in 2005 and continues to this day as a guide for practice, teaching and thinking about architecture and its relationship with the Aboriginal concept of Country. In 2012 this endeavour took the form of the Finding Country Exhibition as an official collateral event of the 13th Venice Architectural Biennale. The central artefact of the exhibition was an 8m x 3m drawing of Brisbane containing 44 grids emptied by 50% to reveal an argument for the form of Country. The drawing was burnt on the opening night as a performative act demonstrating fire as a tool of Country.

Kevin’s current focus is on the development and demonstration of a Designing with Country methodology that seeks to locate people in settings that enable a sense of belonging to (as opposed to owning) Country.