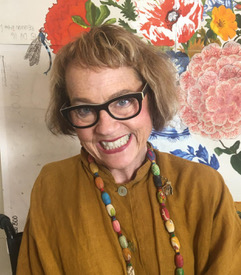 Katherine Sherwood’s work is an embodiment of her ideals as a feminist and reflect her personal experience with disability. In 1997, at the age of 44, she had a cerebral hemorrhage which paralyzed the right side of her body. Teaching herself how to paint again using her non-dominant hand was part of her healing process. Her recent Brain Flowers series of mixed media paintings on the reverse of antique art historical prints include collages of cerebral angiograms of her own brain. As part of her mission to bring attention to underrecognized women painters, Sherwood repaints vanitas paintings by 17th century Dutch and Baroque women artists, in which still lives with fading flowers suggest the brevity of life and the vanity of earthly achievements. Sherwood was born in New Orleans, Louisiana in 1952. She received a BA from the University of California, Davis, in 1975, and an MFA from the San Francisco Art Institute in 1979.

She is Professor Emerita of Painting at the UC Berkeley Department of Art Practice, where she taught painting and drawing, developed two groundbreaking courses; Art, Medicine and Disability and Art and Meditation, and played an active role in the expansion of the Disability Studies program. She serveson the board of Creative Growth Art Center in Oakland, which serves artists with developmental disabilities by providing a supportive studio environment and gallery representation.

Sherwood’s work has been exhibited in the 2000 Whitney Museum Biennial, at Yerba Buena Center for the Arts in 2003 and 2009, and at the Smithsonian in 2010. Recent solo exhibitions include Anglim/Trimble in San Francisco, George Adams Gallery in New York, and Walter Maciel Gallery in Los Angeles. She had a retrospective exhibition at Worth Ryder Art Gallery at UC Berkeley in 2016. The relevance of her work to medicine and brain science has led to her participation in “Visionary Anatomies” at the National Academy of Science in Washington DC, “Inside Out Loud: Visualizing Women’s Health in Contemporary Art” at the Kemper Museum in St. Louis, “Human Being” at the Chicago Cultural Center,and a solo exhibition “Golgi’s Door” at the National Academy of Sciences in 2007. She co-curated the exhibition “Blind at the Museum” at the Berkeley Art Museum. Sherwood was the recipient of a 1989 National Endowment for the Arts Grant, 1999 Pollock Krasner Foundation Grant, 2005 Guggenheim Fellowship, 2006 Joan Mitchell Foundation Grant, and 2012 Newhouse Foundation Grant. Her work is in many major public collections including the Ford Foundation, New York; the San Francisco Museum of Modern Art, California; the National Academy of Sciences, Washington DC; and the University of Missouri, Columbia, among others. She published a chapter, “Out of the Blue: Art, Disability and Yelling,” in the book Contemporary Art and Disability Studies (Routledge Press, 2019). She is represented by George Adams Gallery in New York, Walter Maciel Gallery in Los Angeles, and Anglim/Trimble Gallery in San Francisco. She lives and works in the San Francisco Bay Area.