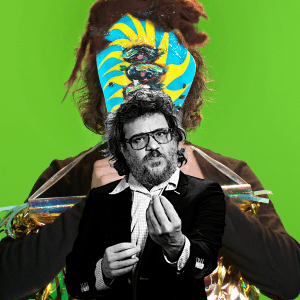 Miguel Abreu Gallery is pleased to announce the opening, on Thursday, December 9, of Jimmy Raskin’s STATIONS OF THE LAST ECCENTRIC, the artist’s fourth one-person exhibition at the gallery. STATIONS OF THE LAST ECCENTRIC features nine layered works, each holding at its center The Cone of Expression. This diagrammatic overlay includes a prominent vertical line that imposes a primordial fold, creating a mirror-image wherein a chosen picture of the cosmos faces itself. This event, in turn, conjures a myriad of faces staring back at the viewer. The phenomenon, known as facial pareidolia, instills an emotional charge in an otherwise non-sentient image or form. A point of connective stillness emerges, which may be considered sacrificial: we bypass the layers, critical-distance, dynamic conversations therein, and reach an almost humorous reduction point; an anthropomorphic flattening in the name of stillness. Within the gaze of the gaze, a space for mesmerization or resonance is generated.

An artist book accompanies the exhibition.

Jimmy Raskin (b. 1970, Los Angeles) lives and works in New York. A graduate of the California Institute of the Arts, Raskin has exhibited his work internationally and staged “lecture-performances” in institutions, art galleries and other non-traditional gathering places since the mid-1990s, notably at the P.S.1 Contemporary Art Center, Thread Waxing Space, Foundation 2021, Greene-Naftali, Cooper Union, Miguel Abreu Gallery, SculptureCenter (all in New York), as well as at the Centre Pompidou, Paris, Real Art Ways, Hartford, The Swiss Institute, Paris, and KW Institute for Contemporary Art, Berlin. In 2013, Raskin participated in Performa 13 as part of Performa After Hours, which marked his second contribution to the performance biennial, following A Certain Misgiving in the Disciple (2009). Raskin’s third one-person exhibition at Miguel Abreu Gallery, Petals Ears & Tears, was held in 2013. Previously, his work was selected for the Art Statements sector of Art |42| Basel (2011). He was included in For the blind man in the dark looking for the black cat that isn’t there (2010), a major group exhibition curated by Anthony Huberman at the Contemporary Art Museum St. Louis. The show traveled to the Museum of Contemporary Art, Detroit, the ICA, London, de Appel Arts Center, Amsterdam, and Culturgest, Lisbon. Raskin also participated in the group exhibition Breaking New Ground Underground (2009), curated by Thea Westreich at Stonescape, a private museum in Napa Valley, California.

Raskin’s publications include The Prologue, The Poltergeist & The Hollow Tree (Foundation 20 21, 2005), The Lisbon Lecture (Sequence Press, 2012), Corner Jump (Onestar Press, 2012), and The Final Eternal Return, published as part of his participation in the group exhibition Tribe-Specific at Felix Gaudlitz, Vienna (2019).