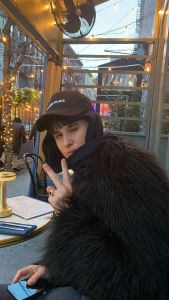 Jazmín López (Buenos Aires, Argentina). She is a filmmaker, a visual artist, and a professor. She graduated from the Universidad del Cine in Buenos Aires. She has also an MFA in Visual Arts from NYU and MFA in Visual Arts from Universidad Torcuato Di Tella. She participated in the WhitneyISP program. Her work is represented by Ruth Benzacar art gallery and has been featured in venues like Fondation Pernod Ricard, San Jose Museum, OCAT, Tabacalera, Kadist, Istanbul Biennial and KW. Her films had participated in festivals like: Orizonti oficial competition Venezia Biennial, Rotterdam Film Fest, Viennale, New Directors New Films at MoMA and Lincoln Center, Centre George Pompidou and KW institute Berlin, among many other world Film Festivals and featured in Variety and New York Times.

She has taught a Master Class in École Nationale Supérieure des Beaux-Arts de Lyon and was part of the Jury in the 33 FID Marseille. She works as professor for NYU and as an assistant professor of Boris Groys. She worked as a full faculty professor at Universidad del cine, Buenos Aires.

The book mentioned in the interview is In Praise of Love, Book by Alain Badiou.