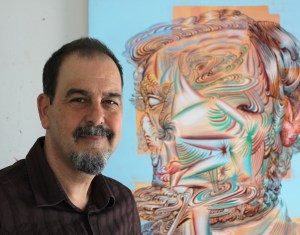 Working in the border territory between abstraction and representation, James Esber uses a variety of media to disassemble and distort the emotionally charged and often clichéd images of Americana. The characters he’s drawn to, pawed-over icons of popular culture, include things like gunslingers, flag-wavers, dimpled children holding flowers, deadbeat alcoholic dads, and self-absorbed selfie-takers. His paintings, built through a process of hyperbolic mark-making, are done with myopic focus on each part, shifting between scales and allowing for improvised digressions which nudge the image toward abstraction. The resulting hybrid images are often fragmenting and imploding while at the same time stubbornly retaining their integrity.
James Esber has shown his work in New York and abroad including a 25-year survey at the Clifford Gallery at Colgate University (2014) and a solo exhibition at the Aldrich Contemporary Art Museum in Ridgefield, CT (2011). He has had multiple one-person shows at PPOW, NYC, Bernard Tolle in Boston and Pierogi in both New York and Leipzig. He has also shown widely in group exhibitions, including One Work at the Tang Museum (2014), The Land of Earthly Delights at The Laguna Art Museum (2008), and SITE Santa Fe’s Fifth International Biennial: Disparities and Deformations: Our Grotesque (2004).
He lives in Brooklyn, NY and is represented by Pierogi Gallery.
The book mentioned in the interview is The Inkblots by Damion Searls.