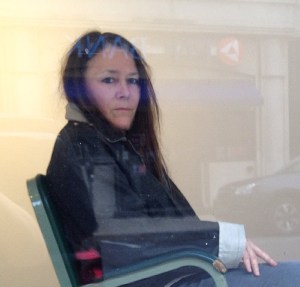 Caterina Verde is an American and French artist whose work is most often presented in a cross-plat- form of media that includes video, installation, performance, drawing, photography, and editions. Much of what she has considered in her practice has centered around identity construction + constriction through referencing historical, psychological, perceptual content as well as language and its use for limitation and containing culture.

Verde is a 2021 recipient of a New York City Artist Corps grant sponsored by NYFA and the NYC Depart- ment of Cultural Affairs for her three-channel video (in-progress and most recent) project, Inside Remote Viewing and the Recreational Vehicle.

In the nineties, she was the Hybrid and Performance Curator for The Kitchen in NYC (under a pseudonym), and later spearheaded a few early online performance projects, including, Strange Positioning Systems and most recently Peat and Repeat, an art edition house based in NYC. In September 2021, Verde curated the exhibition: “a micro-biology of circumstance: now what?” at the Tashmoo Springs Pumping Station in Vineyard Haven, Mass.

Caterina has received grants and residencies internationally. This year, Verde gave birth to an animated character, Pandarina deChine who is now occupying a certain realm of Verde’s work.

Currently she is exploring the flora and fauna of New York City and its environs in search of the lost paradise. She lives and works in the Ridgewood section of Queens, NY.