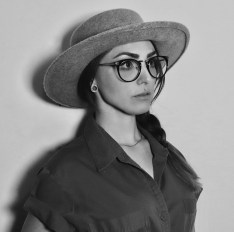 Brittany M. Watkins (b.1989) is an interdisciplinary artist based in the Southern United States. Her practice examines contemporary society through a lens of psycho-analysis and social critique as she moves between a range of media. From immersive installation to hyper edited video-performances, her intuitive (subconscious) process mirrors the push and pull between interiority and public life, linking larger social issues to the fragility of the human psyche. Since obtaining her Master’s Degree of Fine Art in 2016 from Florida State University, she has exhibited in venues ranging from international art fairs and museums to experimental, artist-run-spaces in the U.S. and abroad. Her site-specific installation <Accept [(Self) + Elsewhere] was awarded the Juried Panel Prize ($25,000) in ArtFields 2017, where she later erected a public art installation at TRAX Visual Art Center for ArtFields 2018. She was a finalist for Foundwork’s Inaugural Artist Prize (2019) and later nominated for the Joan Mitchell Painter’s & Sculptor’s Grant in 2020. Since 2018, she has participated in residencies such as The Vermont Studio Center, 701 Center for Contemporary Art, Hambidge Center for Creative Arts & Sciences, and Long Road Projects. She currently lives and works in Columbia, South Carolina as a full-time artist.

The books mentioned in the interview are Mastery by Robert Greene and The Sun Also Rises by Ernest Hemingway.