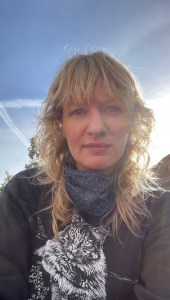 Ariana Page Russell creates images that explore the skin as a document of human experience, using her own hypersensitive flesh to illustrate the ways we expose, express, adorn and articulate ourselves. Her fascination with skin and the body are inspired in part by her dermatographia, a condition in which one’s skin temporarily welts when lightly scratched. Dermatographia also connects her to people all over the world via her images and writing. She’s been making art with and inspired by her skin for about 20 years.

Russell is a Los Angeles based artist whose work has been exhibited in New York, Seattle, Los Angeles, Dublin, Belgium, New Dehli, Toronto, Australia, Bolivia and Venezuela, amongst other places. Her work has appeared in Art in America, the Huffington Post, Wired, The Atlantic, VISION Magazine: China, The Indian Express, Women’s Health Magazine, and the monograph ‘Dressing’ published by Decode Books. She was featured on ABC News 20/20 and was invited to give a TEDx Talk at University of North Carolina in 2016. She received her MFA from the University of Washington, Seattle in 2005.

The book mentioned in the interview is Hunt, Gather, Parent.