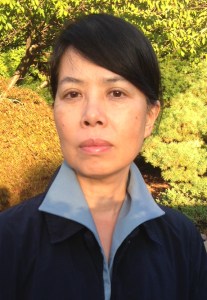 An-My Lê lives and works in Brooklyn, New York. Lê received her BA from Stanford University and a Master of Fine Arts from the Yale University School of Art. She is the Charles Franklin Kellogg and Grace E. Ramsey Kellogg Professor in the Arts at Bard College, New York, where she has taught since 1999. In addition to her survey exhibition, On Contested Terrain, traveling in the US, she has had solo exhibitions at the MK Gallery, Milton Keynes (England) and Museum aan de Stoom (Belgium) in 2014; Baltimore Museum of Art in 2013; San Francisco Museum of Modern Art / SFMOMA in 2008; Dia:Beacon in 2006-07; and MoMA PS1 Contemporary Arts Center in 2002.

As a teenager Lê fled Vietnam with her family in 1975. They eventually settled in the US as refugees. Her work often addresses the impact of war on culture and on the environment. Lê says her “main goal is to try to photograph landscape in such a way that it suggests a universal history, a personal history, a history of culture.”

Lê is the recipient of numerous awards and grants: in 2012 she was awarded the John D. and Catherine T. MacArthur Foundation Fellowship; in 2010, the Louis Comfort Tiffany Foundation Award; in 2007, the National Science Foundation, Antarctic Artists and Writers Program Award; in 2004 the John Gutmann Photography Fellowship; and in 1997 the John Simon Guggenheim Memorial Foundation fellowship.